LOS ANGELES — People packed a Los Angeles park on a recent Saturday afternoon for a kickball tournament, but no one was as concerned about the score as they were about friendships and fun. Music playing in the background of people shouting words of encouragement, even to the opposing team, laughter and jokes.

Participants are part of the Varsity Gay League, a recreational sports league whose mission is to create a supportive and inclusive sports environment. Although it was competitive during the tournament, by the end of the hot summer day, everyone was looking to have a good time.

Will Hackner, owner and CEO of the league, felt the need in his life for a place to meet other members of the LGBTQ community outside of the bar scene and set out to find a solution.

“I wasn’t meeting anyone myself, I wasn’t having the best times,” Hackner said. “I felt like it was all about drinking and partying, and I was just like, ‘I want to have fun.'”

But creating a sports league wasn’t something Hackner always had in mind. In fact, he wasn’t into sports growing up.

“I was a bullied kid, horribly bullied, tragically bullied, terrified of sports,” Hackner said. “I was little. I was picked. I was attacked. I didn’t go to the gym after freshman year because someone broke my wrist and the gym teacher laughed at me. me. So I was not a sportsman.

As he got older, he began to realize the benefits of playing sports.

“Not just the activity, not just the camaraderie, not just the confidence building and all those nice pieces,” Hackner said. “But it also creates structure in your life that you can use as a basis for other things like how to talk to people, how to stay active, how to be young, how to communicate positively and effectively.”

Fifteen years ago, he and a friend planned what became the first of many events to come. It started with a capture the flag game in the park.

“Fifty people showed up and we said, ‘Wow, there must be something here, a core of something,'” Hackner said. “And that took us away from the races.”

Hackner founded the organization in Los Angeles in 2007. It has since grown into a national organization with sports leagues and events in 22 cities with more than 40,000 athletes. Leagues include a variety of sports for different interests. One of the cities now home to the Varsity Gay League is Phoenix, where members can play in kickball, tennis, dodgeball, and pickleball leagues.

Phoenix league manager Wes Scruggs understands the importance of people feeling a sense of community and belonging, and he’s happy to help others find that. 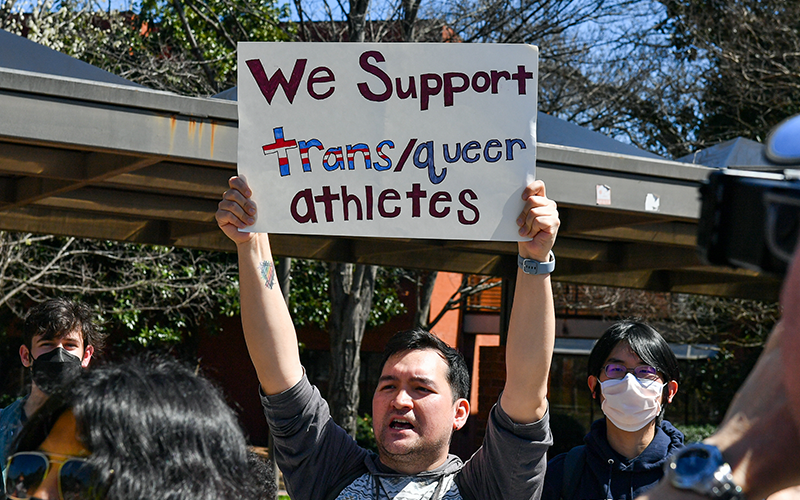 “If you can ever think of a time when maybe you felt uncomfortable around a certain group of people, you felt out of place for whatever reason, that’s a really terrible feeling because that we as humans are wired to want to be accepted,” Scruggs said.

Scruggs has been a football fan for as long as he can remember. He grew up attending NFL games with his father, but said as a child trying to figure out his sexuality, the environment wasn’t always positive for him.

“It’s just super hypermasculinity and stuff, like toxicity,” Scruggs said. “As someone trying to figure out their sexuality and growing up, it’s like, ‘Oh, gosh, OK. I guess that’s not, like, good.

Now Scruggs is able to take his own experience and use it to create a positive environment for league athletes.

“I love to flip that around and say, no, anyone can play, no matter who you are,” Scruggs said.

Varsity Gay League points out that despite its name, the organization invites everyone to join, even those outside of the LGBTQ community. Scruggs said about 15% of the organization’s athletes are Allies.

“First and foremost, I think what we as an organization are trying to keep front and center is welcome for everyone,” Scruggs said. “And when we say that, we mean it.”